The hip joint is a ball and socket type of joint which allows a wide range of motion. 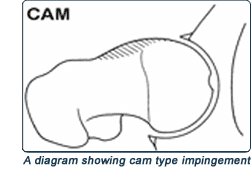 Impingement of the hip is a condition in which the ball and socket are not entirely symmetrical causing the two to pinch together during certain types of movement. The most common type is called “cam” impingement in which the ball (femoral head) is slightly egg shaped or eccentric. This is a result of extra bone deposited on the front of the ball of the hip joint from the growth plate closing at the time of adulthood. Common symptoms are sharp pain in the groin area after activities such as jogging or jumping. This condition is far more common in men than in women (9:1 male to female). Discomfort ranges from mild intermittent irritation of the joint to persistent groin pain, degenerative bone spurs and chronic cartilage damage. There is some data to suggest that chronic untreated impingement may be a common cause of arthritis in men.

Pincer type femoral-acetabular impingement (FAI) is caused by an abnormality on the cup side of the hip joint. This leads to a chronic pinching of the labrum that often results in a labral tear. This type of FAI is more common in women (7:1 female to male). Unfortunately, many patients presenting with labral tears have their treatment aimed at fixing the labrum rather than solving the impingement problem. Many of these patients will have an arthroscopy for a labral tear and report a period of relief only to have the symptoms return again. This cycle generally repeats until the anterior acetabular (bony) abnormality is corrected.